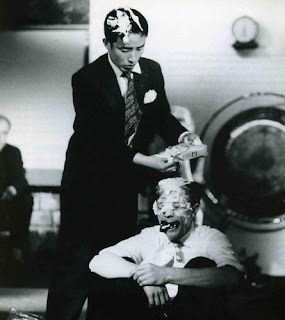 «Etude for Piano»
In 1958, John Cage presented his 'Music Walk' in Jean-Pierre Wilhelm's Galerie 22, Düsseldorf. One year later, Paik stages his first action outside the boundaries of conventional music in the same venue, and dedicates it to the artist who inspired him: 'Hommage à John Cage, Music for Tapes and Piano'. In a letter written in the same year, Paik outlined the main elements of his homage by describing three 'movements' totalling some 10 minutes: 'First set is: «Marcel Duchamp + Dostoyevsky = K. Schwitters, Variété = Variation». It proves that the sublime is essentially inseparable from the ugly and comic.
Second set is «As boring as possible; like Proust, Palestrina, Zen, Gregorian chant, Missa, Parisian café, life, sex and dog staring into the distance.»
Third set is more philosophy of music than philosophical music. Quotes from Artaud and Rimbaud resound from the loudspeakers.'
One review of the music action gives the following account: 'On top of the ladder sat the poet Helms, reading the score from a roll of toilet paper. Beneath him were the instruments: two pianos (one of which had no keys), tape recorders, tin cans with stones, a toy car, a plastic train, an egg, a pane of glass, a bottle holding the stump of a candle, and a music box. The audience was urged to be careful: Stand back, please! The cries of twenty distressed virgins rang out from the tapes, then came the WDR news broadcast. (...) In the fourth movement, the finale furioso, Paik ran about like a madman, sawed through the piano strings with a kitchen knife and then overturned the whole thing. Pianoforte est morte. The applause was never-ending.'
Paik repeated the action a number of times in Mary Baumeister's Cologne studio in June, 1960. In October of the same year, the studio also hosted a joint concert by Cage and Paik, who in the course of his 'Etude for Piano' cut off Cage's tie then washed his co-performer’s hair with shampoo.