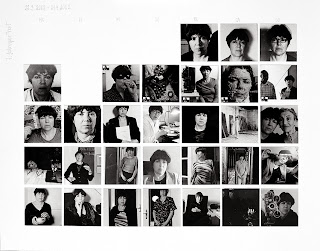 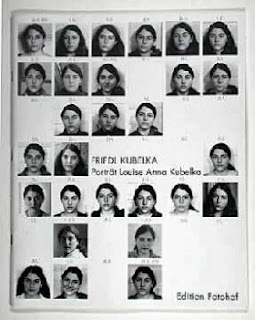 Friedl Kubelka was born in London in 1946. She attended the Photography Department of the Graphic Instruction and Research Institute in Vienna from 1965 to 1969. After her diploma examination as a professional photographer, she ran her own photography studio from 1971 to 1977. In 1977 she directed her first "class in artistic photography" and in 1990 founded her own "School of Artistic Photography" in Vienna. In 1997, she completed her psychoanalytical training. Friedl Kubelka lives in Vienna.

After initial artistic works in 1971, Kubelka started on her long-term project, Year’s Portraits, in 1972. For this, the artist took pictures of herself with a camera on a daily basis over a period of one year – a process that has been repeated every five years since. This conceptually-structured work on the subject of self-portraiture produces a complex picture of a woman’s search for her own identity by alternating excessive poses of female self-representation with documents of personal retreat. Through the choice of staging and props, small stories and personal experiences are hinted at—the individual photographs seem to link up to form a film running at a rate of one frame per day. The continuation of this project in a weekly format (Portrait Louise Anna Kubelka, 1978-96) and on the basis of a single day (e.g., Day Portrait Peter Kubelka, 1974) broken up into a photograph taken every half hour reached its culmination in One Thousand Changing Thoughts (1980) of her mother. This work in 43 sections originated in a suggestion made by her mother, Lore Bondy, and shows a series of portraits with very brief breaks between individual frames and so comes closest to the cinematic process of the dissolution of reality into individual frames. In her cinematic works Kubelka has reversed this photographic process borrowed from film-making by filming peo-ple in a condition of utmost immobility. In films such as Heidi (1974), Peter Kubelka and Jonas Mekas(1994), or Parents (1997-99), the absence of action and plot accentuates the personal interactions taking place during the process of filming and being filmed in a unique way – sometimes leading to the actual appearance of the artist herself in a particular film.